The storks herald the beginning of spring in Estonia as they reappear after their long journey back from sunnier climes. There was some doubt whether they would return at all this year as the snow took so long to leave. Some say they got within reach of Estonia only to turn around and fly back 150km! Some thought they may send others in their stead… 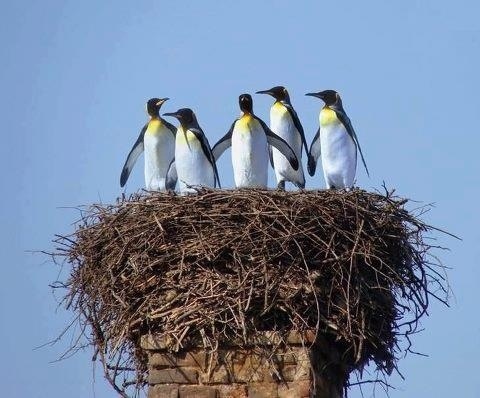 The first few who did arrive looked distinctly depressed and bedraggled having left the heat of Africa for the slush and cold winds of northern Europe. Things have fast improved however and they are now gliding gracefully over the fields to their nests atop roofs and telegraph poles throughout the country. It definitely gives me the feeling that I live in eastern Europe. They make a beautiful sight as they brood and watch over their young. They make no sound, only the clattering of beaks when one parent arrives to relieve the other of their nesting duty.

We all know that it is the stork who delivers the baby now, don’t we!? It is an Estonian custom that after a marriage ceremony, the newly wed couple finds a nearby storks nest where the groom ties a white ribbon to the telegraph pole as a special request….

And what do you know…our friends, Piia and Jaan, who tied the knot last year have had their wish granted and this morning are holding their first born baby in their arms; wonderful!…so maybe it’s true after all! 😉